An Interview with Ran'D Shine by Anastasia Dziekan

The following is an interview which originally appeared in the May 2014 issue of the Society of Young Magicians #96 newsletter, by Anastasia Dziekan.... 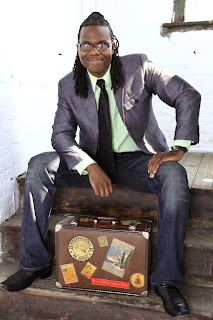 Ran'D is the face of the new millennium magician. He wowed audiences with his brilliant presentation at the 44th Presidential Inauguration in Washington, D.C as well as Capetown, South Africa. As one of the most sought after college performers he has also captured the imaginations of audiences from Hollywood to New York City for more than a decade. He has already read your mind and knows that you want to know more. Read for yourself…

A few years ago, you visited SYM #96, and told us about a trip to Africa and the term “Ubuntu.” That was meaningful to me, and I still remember it even better than the magic you shared with us.

For our newer members, can you summarize what that term means to you and how it relates to magic?

Ubuntu is a word from South African Bantu language that means humanness. It is often translated to mean humanity toward others. But it is often used in a more philosophical sense to mean "the belief in a universal bond of sharing that connects all humanity.  The philosophical definition is the underlying philosophy of my approach to magic.  When I perform it not about what I can do, it more about what we can do together to create a experience, I am just a facilitator, a catalyst to make unexpected things happen.

Most magicians seem to begin to be interested in magic at an early age. Can you describe your first experience with magic and how it managed to grab a hold of you?

Most magicians became interested in magic as a young child or teenager. That’s not my story.  I did experience magic as a teenager but it didn’t grab my attention, I was interested in other things.  My interest in magic didn’t happen until I was in graduate school. A student in the class I was teaching owned a magic shop and showed me a few effects after class.  I was intrigued, confused, curious, and mystified. In other words my brain short circuited. From that day on Brian Foshee and I became friends, and we are friends to this very day.

In magic, unlike most other art forms, a single error can seem to ruin an entire performance. Do you allow any margin for error in your performance (as mentalists sometimes do)? How do you handle or avoid mistakes?

There is always a margin of error in any effect or performance. Humans are not perfect.  The fact that magic is an performance art that involves the use of  participants, that may behave in unpredictable ways is a margin of error we have to accept. However,  I do take some calculated risk in my show, and that is thrilling for me.  But over the years of constant performing I have a arsenal of outs that I can use  if things don’t go as planned.  Hiawatha Johnson once told me “There are no mistakes, only lessons” If you learn the lesson it only prepares you for future challenges.

Do you find that different groups respond differently to magic? (Children, teenagers,
adults and the elderly as well as male and female)

People respond differently depending on their mood. Some people scream and laugh others are silent but have a perplex look on their face.  I have witnessed a range of reactions from all ages groups and gender.

As a magician, what kinds of audiences have you found to be the most difficult and easiest to entertain?

How and how often do you practice, and who serves as a test audience for your new routines?

I practice quite a bit. Whether I practicing my script, blocking or technique. I can only do some much practicing in solitude , so I have a method for testing out  new material in front of an audience during a show.

Often beginning magicians have few outlets to perform and tend to perform nearly exclusively for family & friends.  What are the reactions of your friends and family who have been exposed to your magic for years, and do you perform for them regularly?

I don’t perform for friends or family unless they come to see me at a show.  I think it is
important for the sake of the relationship not to always show friends and family a new
trick. I don’t want to be that type of magician.

Have your magic  skills ever proven useful in the real world?

Yes my magic skills have gotten me a few perks. Nothing really significant, but I have been moved to the front of the line in a crowded event, and people have given me things for free.

What's the first thing people ask you (or ask you to do) once they find out about your profession?

I make every attempt not to tell someone I am a magician. But when they find out they usually ask one of the cliché questions:  Can you make my spouse disappear? Make me rich, etc…  It drives me crazy.

Magic tends to begin as a passion before becoming a profession. If you weren't a magician,
how would you be earning a living?

If I weren't a magician I would probably be a college professor .

What is the best piece of advice about magic you've received, and what was the source of that
advice?

The best piece of advice I was given was “ if you are going to be full time in the magic business, remember business has more letters than magic”.

Suppose you have just a minute or two to show President Obama a quick magic miracle. What effect would you choose and why?

If  had to perform a quick trick for the president, it would be something that he would definitely  keep on his desk that he would remember me every time he looked at it.